Image from V for Vendetta film adapted from graphic novel of same name
How is POP Struggle depicted in hybrids/cross-overs?  Understanding Comics & Graphic Novels as Film

Acknowledging the power of the stories contained within different venues, Hollywood begins to draw upon comics and graphic novels for their creations.  Clearly some of these are better than others.  These improve over time as technology allows greater proximation of what is contained within the comics and graphic novels.  This has led to a greater number of creations with many more on the way.  Now, the movement of the story from the comic and graphic novel format which allows for longer more detailed as well as more complex stories shifts some of the stories - simplifying them in many respects and pairing them down to a more readily digestible form.

V for Vendetta as an example 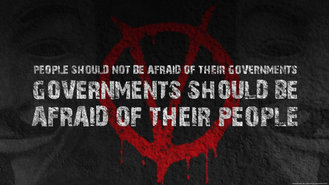 How is the film different from the graphic novel?  Spoiler alert: Well, in both the repressed rise up and win; again, the Rebel's Backlash prevails.  There are some differences as well.  In the graphic novel, the revolutionary's tactics are less justifiable and the recruits training is more rigorous.  In the film, the revolutionary is like a rock star and he seems pretty legitimate as far as rebels go.  His recruit is not trained much though and she kind of falls into place as the heir apparent.