Scene from Joe Sacco's Palestine
How is POP Struggle depicted in graphic novels?

As with all products, I do not claim that state-dissident interactions are the whole story or even sometimes a major part of them. Rather, I claim that contentious politics is part of the story.

Maus as an example 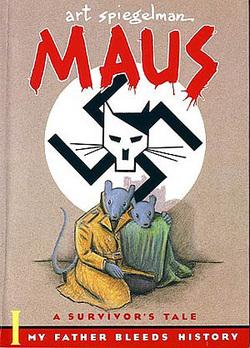 Spoiler alert: The Holocaust is the backdrop against which these stories are told: 1) the survival of the lead character's father during the period of violence and 2) the interaction between the lead character and the father in the present. Classifying this story is complex.  On the one hand, Jews (depicted as mice) are killed off in large numbers by the Nazi government (depicted as cats; poles are pigs who can be mimicked through the use of masks). While rebels normally vanguish the government outright, this story is somewhat different in that there are no clearly defined rebels (as in a group that is armed and overtly trying to over throw).  Here, survival seems to be cast as victory, which of course it is.  This is not the same thing as the Jews through the Nazis from power but it is worthy to note the not so subtle change in the conception of victory.

Additional complexity is added by the fact that the survivor seems to have a very difficult time with their survival.  They have problems with their spouse, with their children and seemingly with day to day life.  Nevertheless, however, the survivor survives and that makes for an important victory.
Partial list of relevant graphic novels: